Welcome to the home page for info on senior softball for north SD county. 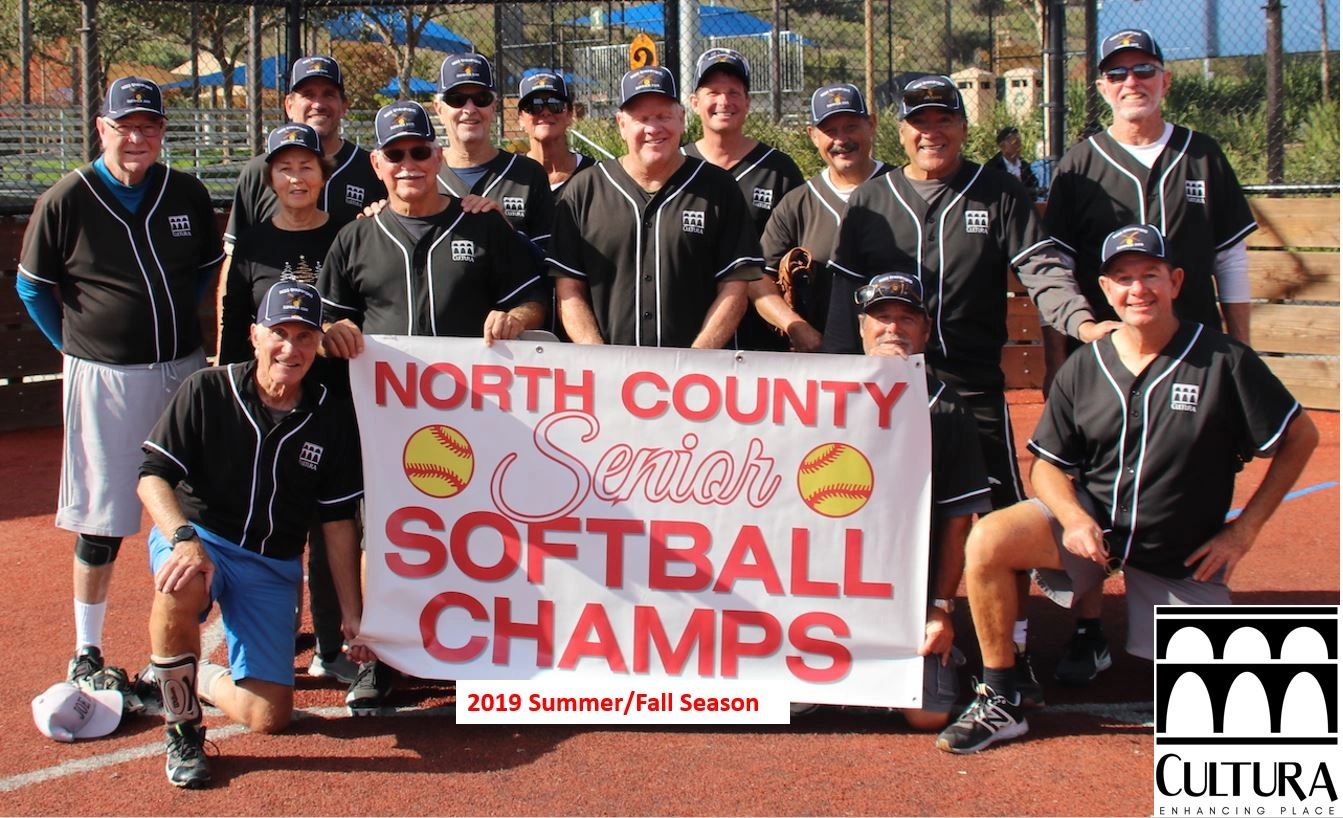 Cultura, under the leadership of their manager Randy Benge, have won the second season of 2019. After a rough start of the season, the entire team pulled together to march up the standings to end the season on top.  Fantastic season, Cultura!

The rain had passed, the sun came out, the stands were full and the two top teams in the North County Softball League, league champion Cultura and the third place finisher Village Pie Shoppe were ready to do battle for the playoff championship. And they did not disappoint! In what was described by spectator and players alike as an exciting and perhaps the best played game of the year, Cultura prevailed over VPS by the score of 25 to 20. It was a fitting swan song for Cultura as team sponsor and Randy Benge as manager.

VPS jumped out early, scoring 5 runs in the top of the first, but Cultura clawed its way back into the lead in the second and held on to the seventh, when, after the teams traded runs in the middle innings, Cultura scored 4 in the bottom of the seventh to take a 20-14 lead. With their backs against the wall in the 8th, VPS came up with 6 runs that featured a rocket 3 run HR off the bat of Mark Forster (the second of his 2 HRs) to tie the score at 20. Cultura, unfazed, came back with 5 in the bottom of the 8th, capped off by a grand slam by second basemen Al Galaviz (who knocked in 5 runs).

Cultura was led by a host of hitters who were perfect at the plate; Bill Kutzner, Mark Turnlund, Brian Turner (including a HR) and Joe Paul. VPS was led by Jeff Gorman (4/4), Marlon Moore (4/4) and Mark Forster (2 HRs).

Defensively, both teams were on their game.

A big thanks to Rick Shaw and Al Cabacungan for doing a professional umpiring job.


A final note: Cultura is Italian meaning culture. If you have good players and if they are in the right "cultura" (and have the best team shirts), then winning and success are easy.

After showing its appreciation to Randy for managing the team to a first place finish (”you don’t tell Frank Sinatra that he was a good singer and you don’t have to tell Randy that he was a good manager,” but we did anyway), Cultura came out firing on all cylinders and came away with a 21-10 victory over Nucci’s in the first round of the playoffs. Cultura never trailed in the game and held Nucci’s to 3 runs over the final 6 innings. It was a total team effort by Cultura, batting a combined average of .666 over 7 innings with the top of the order providing much of the power and the bottom of the order providing consistent hitting to allow the big bangers to drive in the runs. A HR by Randy+ 4 RBIs and perfect plate appearances by Al, Bob (who reached the 100 RBI mark), Mark and Mike led the way for Cultura. Worth noting was an almost HR by Karen, that, but for the soccer goal, would have easily been a round tripper. Steve Berry was tough on the mound, mixing up his pitches and keeping batters off balance. Defensively, Harry nailed several runners at first with his patented (and accurate) once bounce throw.

Offensively, Dave Koch and Pete Penseyres homered for Nucci’s. Defensively, Dave Ash, playing a solid SS, made an extraordinary throw from deep short to nail a runner at first.

The game moved along quickly as Al Cabacungan and Roney Lewis did their usual good umpiring job.

On to the finals.

Solana Spa's Chuck Dodd was 3-3 with a triple.

Thanks to Rick Shaw and Tony Sando  for umpiring.

Standings are posted after all scores have been received